This is not a commercial blog.  While basic WordPress blogs are free, I pay extra to eliminate advertising and to use my own URL without the .wordpress extension.

Please note that clicking on book links appearing in a post will – unless indicated otherwise – take you to Amazon, where I earn a few pennies from qualifying sales.

This helps with the general cost of keeping the blog afloat.

It was on the eve of a new year that she-who-scribbles sat in the throne room at the rainforest monastery and asked any deities who might be lurking and listening to reveal the way ahead.

What happened?  Nothing.  Empty spacious silence roared through the room.  An hour or so later the gong sounded for lunch. 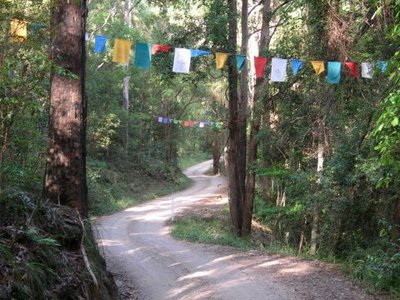 En route back to her room, her right knee – the location of an old injury – exploded into a fury of crippling pain that would take six months to heal and would eventually need surgery.

Quite literally, she was knee-capped by the universe: 2002 was the year of the big bang!

Hobbled and humbled, it wasn’t long before what had happened in the knee played itself out in the brain.

Lesson:  The best way forward is sometimes to stop.  If one can’t or won’t, no problem.  Grace will step in and sort it.

well
it was rather auspicious:

on the eve of a new year, while holed-up
at a Tibetan Buddhist Monastery
Life
knee-capped
Itself

she-who-scribbles
was brought to her knees
crippled, dis-abled, humbled

the scene was set:

with now, with this, with here

and one day the ‘with’ disappeared